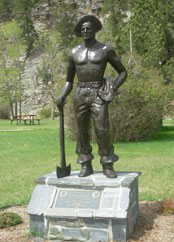 The Civilian Conservation Corps (CCC) was introduced in the 1930s as a dual effort to battle unemployment rates and protect natural resources in rural lands owned by federal, state, and local governments. Today, the spirit of the CCC Camp and its workers is kept alive in the Black Hills by the Hill City CCC Museum

The museum, opened in the spring of ’09, is housed in the upstairs quarters of the Hill City Visitor Information Center (the “VIC”). The 6-foot tall bronze sculpture out front commemorates the CCC worker of the Great Depression era while standing sentry over the front of the building.

With 728 square feet of archiving and artifact display, the CCC Museum will satisfy the curiosity of any Black Hills history enthusiast, drawing patrons in to the Civilian Conservation Corps’ resonant past. In addition, the museum also features a computer database where visitors can search names of all men who served in the CCC in South Dakota. A grant to build the database was bestowed by the Mary Chilton Foundation of the Daughters of the American Revolution (DAR) in Sioux Falls, SD.